A fuel surge tank (FST) is designed to prevent fuel starvation to the engine on vehicles with inadequate fuel tank baffling. The FST fuel pump(s) feed the fuel rail(s). The volume of fuel inside the surge tank acts as a buffer to always keep the FST pump supplied with fuel. This volume is maintained by the main fuel tank's pump as well as the fuel returning from the fuel pressure regulator. Excess fuel in the surge tank is returned back to the vehicle's main fuel tank.

The surge tank also provides a quick and easy way to upgade any standard fuel system with a compact size. This is an excellent fueling solution for vehicles installing large demand power upgrades such as forced induction.

Radium Engineering "pumpless" FSTs were designed for users that already have a secondary external fuel pump. It provides a reservoir from which an external pump can draw from. It features a single or dual anodized PTFE pick-up tubes rather than an integrated internal fuel pump. These surge tanks are most effective when mounted vertically, however it can be tipped up to a 45 degree angle. Radium does not recommend mounting these surge tanks horizontally, as the pick-up may be prone to drawing in air pockets.

The High Volume fuel surge tank (HVFST) is an ideal option for very high flow external fuel pumps requiring a large reservoir and feed line. It must be mounted as near vertical as possible. A mounting bracket is not needed with the HVFST.

All external pump fuel surge tanks require a "lift pump" to supply them with fuel. Excess fuel is then routed back to the OEM fuel tank or fuel cell. The pump feeding the engine, then draws it's fuel from the surge tank, with excess returning from the regulator back to the surge tank. 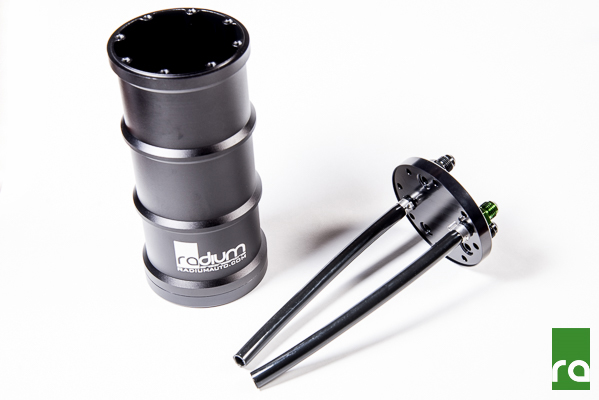 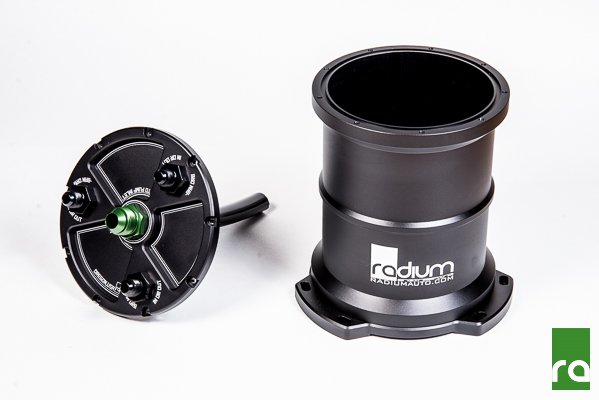 The 3 black ports are used for fuel entering and exiting the surge tank. The High Volume Fuel Surge Tank includes three -6AN male fittings. However, if -8AN and/or -10AN port fittings are required (shown below), they can be purchased separately. 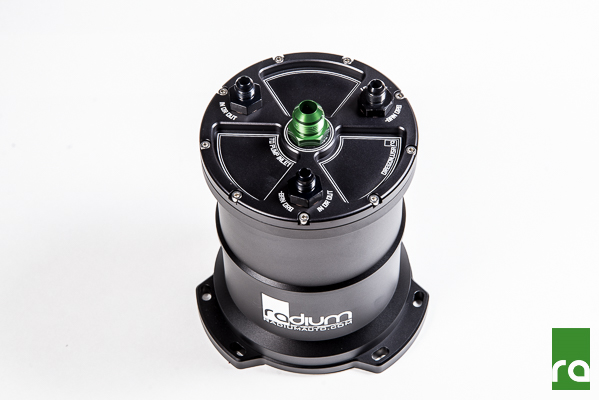 The fuel surge tank can be mounted near the main fuel tank or in the engine bay. Mounting locations near heat sources or moving parts such as suspension components should be avoided. It should also be mounted away from common collision areas.
Choose a bracket below that best fits your mounting needs. 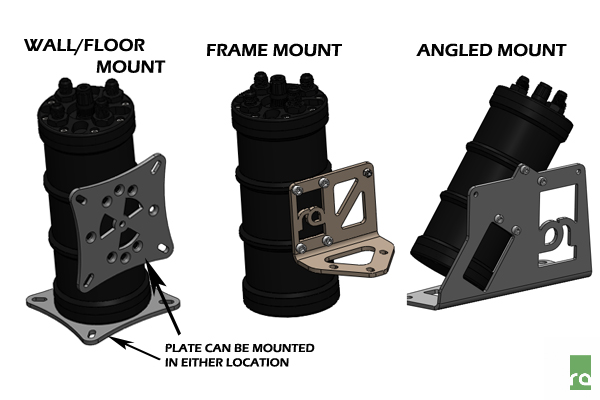 Floor and Wall Mount - This bracket is laser cut from aluminum and powder coated black and can be mounted on the side or bottom of the surge tank.

Frame Mount - Because this bracket has a 90deg formed bend and is cantilevered, it is constructed from steel for superior strength. It is not only nickel plated to resist corrosion, it also allows for components to be grounded to the spare hole in the bracket. This assumes the bracket is mounted to an electrically conductive material such as a steel frame.

Angled Mount - This mounting bracket is used for vehicles that may have a limited mounting height. It can be mounted on a floor and against a wall. This bracket is made from laser cut aluminum and powder coated black.

A fuel surge tank (FST) is designed to prevent fuel starvation to the engine on vehicles with inadequate fuel tank baffling. The FST fuel pump(s)...